Use this setlist for your event review and get all updates automatically!

American rock band, Shinedown, lights up the Hollywood Casino Amphitheatre on July 14th with support from Badflower, Dinosaur Pile-Up, and Broken Hands on their Attention Attention World Tour. It was a hot and humid night but the rock music from these amazing artists made it all worth it. Ive been a fan of Shinedown since their first album, Leave a Whisper, that came out in 2003. Unfortunately, Ive only had a chance to see them live twice in Grayslake, IL before this show.

Broken Hands is a rock band based out of the United Kingdom. They will be putting out a record under Atlantic Records on August 9th called, Split In Two. Singer, Dale Norton controls the stage with backing vocals

by his brother, Callum, but the entire band was in sync and enjoyed themselves in stage in front of this large audience. The band has sort of a grunge, alternative sound with their distorted, chugging guitars. I really enjoyed the song, Split in Two. You can check out their most recent single, Wrong Track on Youtube before their upcoming album release.

Dinosaur Pile-Up is another United Kingdom based alternative rock band who recently put out an album called, Celebrity Mansions. They will be taking off on their own headlining tour on July 30th. The sound of the band brings me back to some of the early 2000 alternative bands; Hot Action Cop comes to mind from their recent single, Back Foot. Theyre fun and all of their songs have their own sound to them which really helps them fit into, but still stand out in, todays music scene. With only being three members they sounded great live! They gelled really well together and the fans loved them with their low key vibe but high intensity music. They were very thankful for all of the support of their music throughout their set.

Badflower is direct support on this tour for Shinedown and the only other supporting band that Ive listened to before this tour kicked off. The band gained attention quickly when their singles, Ghost and Heroin came out on the Rock charts at #1 from their album, OK, IM SICK. The energy that this band brings live is so much fun to watch. Josh Katz is a perfect frontman for the band with his higher voice and almost eerie persona on stage. Josh was bouncing around like a madman, bending over backwards, and sliding across the stage on his back in between the singing portions of the song, with bassist Alex Espiritu joining in. Sure you could head bang or jump around but how many musicians are as flexible and nimble as Katz? The band has a very bright future and will continue to impress fans with their music and live show. I highly recommend checking them out to see what Im talking about the next time that they come through your city! I would love to have the opportunity to photograph the band again because it was such a good time.

Shinedown takes the stage in style with the Attention Attention intro playing with a curtain over the stage. As the curtain drops, the band kicks it into high gear as they play, Devil, the single from their most recent album, Attention Attention. The stage had pyro around the drum riser and down the ramp, which made for some awesome pictures. Brent Smith has a fantastic voice, easily one of my favorites in rock, and really knows how to take charge of a stage with his confidence. All band members, Brent Smith, Zach Myers, Barry Kerch, and Eric Bass, interact with each other and have fun throughout the concert and joke around at times between songs.

On the back of the set were exclamation video screens that would act as lights or video screens throughout their set but they lit up the entire stage. On top of the lights and screens were some lasers, fireworks and some fire that would come from the riser and around the stage. A couple of the pyrotechnics made all of the photographers in the pit jump. The fire was nice and hot right up front but led to some pictures that are hard to replicate the emotion of. The band is known for incorporating pyro into their shows and Im very glad that I was able to capture it in a few of my photos.

I heard from another photographer that Smith makes it a point to thank all of the photographers up front and he did go around to shake every one of our hands. As someone that is relatively new in the concert photography industry, this is something that will stand out to me as I attend all of my upcoming concerts.

As Ive said in previous reviews of concerts, I always love when bands do something different to surprise the fans and stand out. This is the first concert that Ive been to where the band had small stages setup throughout the venue for each of the band members. It was neat because those who didnt have pit tickets would still be able to get close to the band. The pavilion has pillars in between the seating sections and there were different stages setup with Smith being center and more towards the lawn. They performed a few songs and communicated with the fans there before heading back to the main stage. I thought to myself who else has done this?! A lot of times, artists will leave the stage, crowd surf, but never anything to this extent and it was fantastic.

During the song, Get Up, the band had fans put up their lighters and cell phones which made for a sea of lights filling the arena. Myers played the piano and Smith sat down to sing with him. With being such a large venue and seeing the fans from the front of pit to the back of the lawn waving along was an amazing sight to see. After the song, Smith talks of the lack of negativity and how music is a way to bring people together with positivity.

The evening is finished off with the song Brilliant, which featured the band members on the screens on the back of the stage also singing along. Before leaving, they thank the audience again, tossed out the leftover guitar picks, drum sticks, and set lists.

Shinedown is a band that I would see again and again because of their confidence, stage presence, and their music sounds just as good as their albums, if not better. If you are a fan of this band and havent seen them live, you should try to get out to a show because you will not be disappointed. The camaraderie and sense of friendship/family between the band members can be felt throughout their entire performance that leaves fans fulfilled.

Jason Isbell and The 400 Unit

Theory of a Deadman 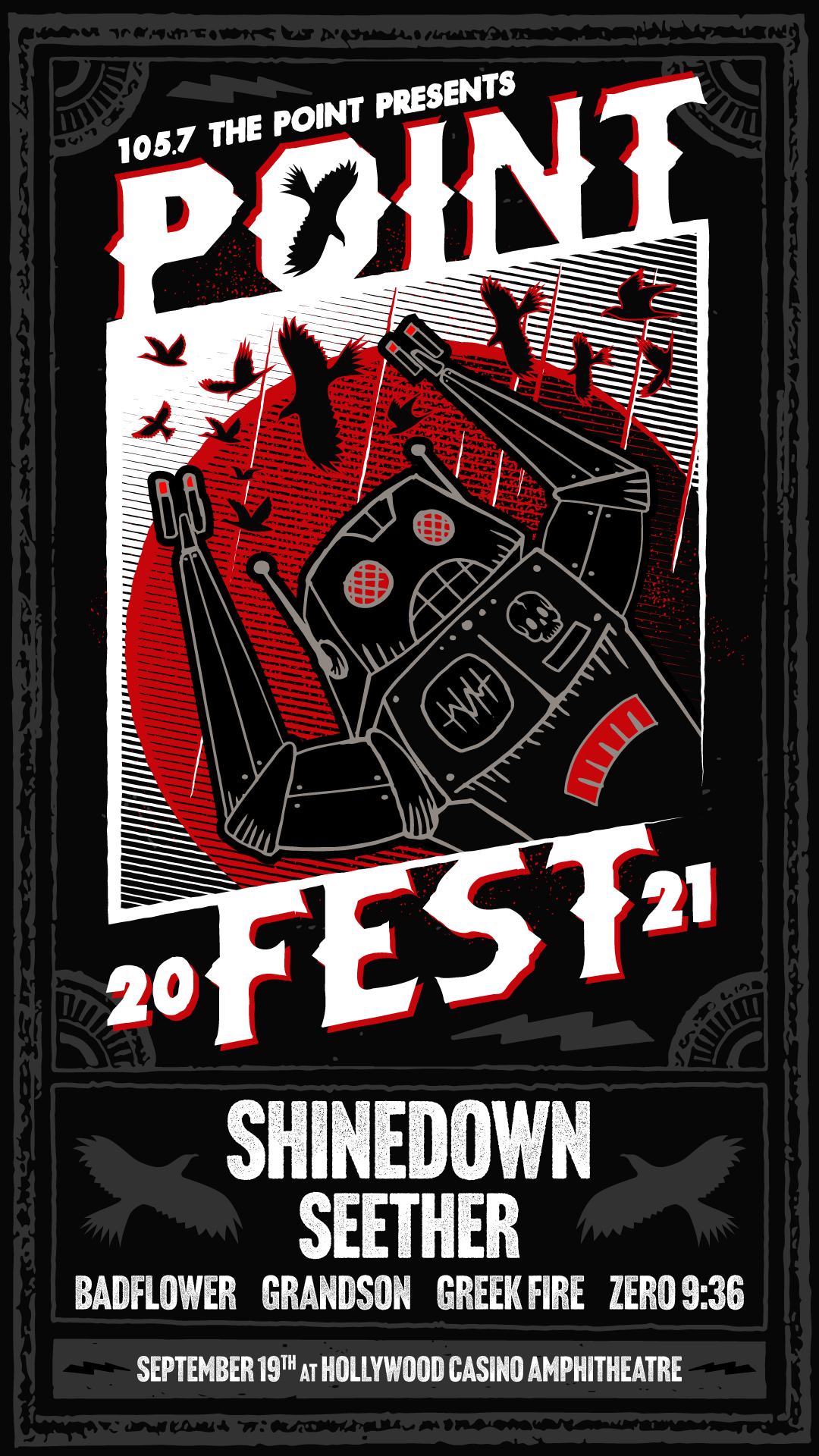 The Colosseum At Caesars Windsor

You can add up to 7 bands. Please list the headliner first and any support acts after.

If you pour some music on whatever’s wrong, it’ll sure help out.
Levon Helm

Just give me one thing that I can hold on to.
John Prine

Shinedown at the Hollywood Casino Ampthitheatre in Tinley Park, IL

It was already a hot and humid night at the Hollywood Casino Amphitheatre, but things were kicked up a notch with four bands and plenty of pyro. First up were the British boys from Canterbury, Broken Hands. Singer, Dale Norton, couldnt stand still for second as he worked the large stage, making sure the already sizable audience was ready for what lay ahead.

Their second album, Split In Two, is set for release on August 9. What better way to showcase songs from it to the US market than opening for a band like Shinedown who are sure to draw a huge crowd. Heres wishing them all the best for the new release.

At times, there was so much going on that it was hard to decide where to look. Brent Smith would march around the stage, interacting with as much of the audience as he possibly could, next minute hes standing up next to Barry Kerch on the drums as the pyro was firing up all around him and Zach Myers and Eric Bass are upfront smiling and pulling faces at the crowd.

This show is a pure adrenaline rush from beginning to end. If you werent sweating from the hot summers weather, you certainly would have been from this. How they could come out all suited and booted is a mystery! Shinedown put their all into their performances and look like they are loving every minute of it every bit as much as the crowd. Its no wonder the fans come back time after time to see them. This is one of those shows youll be talking about and buzzing from for some time afterward.